Protein kinases are arguably the most tractable candidates for development of new therapies to treat breast cancer. Recent data has shown that kinase cascades and signaling pathways are interrelated; inhibition by one pharmacologic kinase inhibitor has consequences beyond its cognate targets. 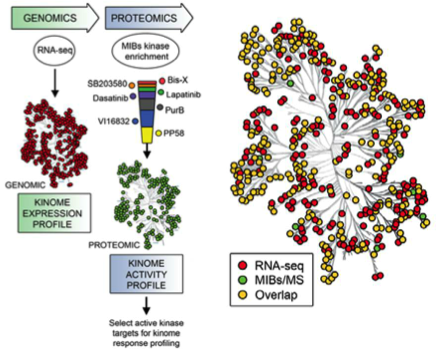 Our hypothesis predicts that defining tumor kinome activity, and overall kinome-level response to therapy, will identify kinase signatures that can be targeted to accelerate development of new therapies for clinical trials. Project 5 uses an innovative new technology to study the kinome in the Basal-like and Claudin-low subtypes elucidating novel kinase targets and defining differences between these two subtypes. The technology affinity captures endogenous kinases and analyzes their activity with quantitative mass spectrometry, providing us with large scale, kinome activity profiles in tumors and cells. The quantitative proteomic assessment can also be used in dynamic tests determining what fraction of the kinome responds to inhibition of targeted kinases. The Raf-MEK-ERK pathway is often activated in Basal-like and Claudin-low breast cancer. For proof of concept, we defined the kinome response to MEK inhibition in a Claudin-low cell line and mouse tumor model of Basallike/Claudin-low breast cancer. The tumor response to targeted kinase inhibition involved a highly reproducible induction and activation of multiple RTKs that contributed to drug resistance. Given the repertoire of RTKs whose expression and activity was induced with MEK inhibition, we predicted that a combination therapy that would “broaden” the kinase targeting sufficiently to produce significant therapeutic benefit. The combination therapy increased apoptosis and tumor regression in genetically-engineered models of TNBC. The response was significant compared to either drug alone. Thus, we created a signature of therapeutic response resistance allowing a rational prediction of combinatorial therapies.

This approach will be used to create signatures of kinome response to MEK inhibitors, PI3K inhibitors and other kinase inhibitors (both clinically available and in development) using Claudin-low and Basal-like breast cancer cells, GEMMs and patient-derived xenografts. A window trial in patients with TNBC, performed in collaboration with GlaxoSmithKline using their MEK inhibitor, is currently in clinical trials. The trial will provide dynamic data for comparison to that obtained in cell lines, GEMMs and patient-derived xenografts. The window trial will be first to assess kinome reprogramming with the goal of potentially allowing rational prediction of combination therapies in a patient.