Katie Morgan, PharmD, is a clinical pharmacist working with neuro-oncology and genitourinary-oncology patients at the N.C. Cancer Hospital. It was during her father’s four-year battle with glioblastoma, an aggressive brain cancer, that she found her calling in pharmacy. To honor her father and others who are fighting brain cancer, Morgan is running in the Head for the Cure 5K, which will be held Sept. 8 in Chapel Hill. Through her team, Ron’s Space Rangers, she is working to raise money for brain cancer research. 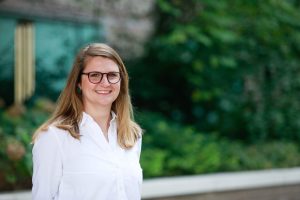 Growing up, Katie Morgan, PharmD, was sure she would follow in her father’s footsteps and become a NASA astronaut. She looked at the stars in their backyard from telescopes her father built, and was able to talk to him during one of his two missions into space when he radioed into her elementary school classroom.

“He said looking down on the earth from the space shuttle was one of the most beautiful things he’s ever seen,” Morgan said of her father, Ron Parise, who worked as a NASA payload specialist. But her life changed course after her father was diagnosed with glioblastoma, an aggressive form of brain cancer.

Morgan moved home to help care for him after college, and it was during his four-year battle with the disease that she decided to follow her mother’s path and become a pharmacist. She took science classes while living at home, and worked as a pharmacy technician at the National Institutes of Health. She was accepted into the UNC Eshelman School of Pharmacy and graduated as class president in 2012. She ended up caring for both of her parents during cancer treatment. She lost her mother, Cecelia Parise, to breast cancer in 2016.

“I miss them both incredibly,” Morgan said. “Nobody loves you like your parents do. Not having my parents here, especially to watch my kids grow up, it’s really tough,” she said.

Now, in her role as a clinical pharmacist working with neuro-oncology and genitourinary-oncology patients at the N.C. Cancer Hospital, Morgan, said her own experience caring for loved ones with cancer has helped her to understand what her patients are going through. She works to ensure they have the best quality of life to enjoy precious moments in their lives.

To honor her father and others who are fighting brain cancer, Morgan is running in the Head for the Cure 5K, which will be held Sept. 8 in Chapel Hill. Through her team, Ron’s Space Rangers, she is working to raise money for brain cancer research.

Why are you running with Head for the Cure?

Glioblastoma is a terrible diagnosis. It’s incredibly difficult to treat. I’ve talked to other people who have been caretakers for people with glioblastoma, and we all agree, you kind of lose your person – whether it’s because their personality changes or they are no longer able to communicate; it depends on where the tumor is. My dad couldn’t talk anymore…he couldn’t write toward the end, when it recurred. That was really hard for him and us because he was a high-functioning human.

I am raising money to support research for new treatments. Hopefully this will extend patients’ quality of life, quantity of life, and be able to bring this disease closer to understanding what is really driving the tumor. The prognosis is extremely poor. My dad did excellent. He lived for four years after his diagnosis – that’s amazing. Four years is a really long time for glioblastoma. That speaks to how fit he was; he was able to tolerate the treatments really well. For a lot of patients, glioblastoma comes with a very short life span after diagnosis. And so, it’s difficult for the patients and families. My team is called Ron’s Space Rangers. I have about 25 people on my team, including a couple of my friends from home, a lot of pharmacists and a few physicians. A lot of people donated. But I haven’t met my goal – my goal is $5,000.

Can you tell me more about what was special about your dad?

He was awesome. He was super light-hearted. He had a lot of determination – to be an astronaut takes a lot of grit. Usually they are military, but he wasn’t, he was an astronomer. He worked really, really hard. That speaks to his hardworking nature and determination. He was the rock of our family, and so losing him was really devastating to all of us.

What made you want to be a pharmacist?

It was a long road getting to here. For me, personally, (I became interested in pharmacy after) my dad was actually diagnosed with glioblastoma in 2004, when I was still in undergrad. That got me interested generally in cancer treatment, pharmacy and pharmacology. I think that my personal experience put me in a unique position to really care for patients in a way that I can provide a lot of empathy for patients and for the caregivers, and I really understand where they’re coming from because I’ve been there twice now unfortunately.

What do you love most about your position at the N.C. Cancer Hospital?

The thing I like the most about my job is being able to help patients. I don’t often share (my personal story) with patients, but it makes me a better practitioner. Being able to help the patients with something even as simple as constipation – it really improves their quality of life. Having a good quality of life with those really challenging days, even toward the end, is really important to patients. I think that gives me the most satisfaction out of what I do in general because I’m able to see the patient and see the family, and they call me all the time and say, ‘oh this is bothering me…’ I’m there to provide that support. That’s what I really enjoy, and patients really appreciate that.

More information on Ron’s Space Rangers, including how to donate in support of Katie and the team is available online at http://events.headforthecure.org/site/TR/Events/General?team_id=10449&pg=team&fr_id=1542