Angela Smith, MD, MS, is driven by personal growth. Whether it’s creating a multi-disciplinary approach to a patient’s cancer care, seeking better ways to engage patients in their treatment plans through patient-reported outcomes research or spending time with her family, her natural curiosity inspires her to seek personal insights and ways to improve her life and the lives of those around her.

It was this curiosity that fortuitously led Smith to Chapel Hill. When she was a high school senior, Smith came to North Carolina from Pittsburgh, her hometown, to tour Duke University. She decided on the spur of the moment to check out UNC-Chapel Hill since it was close by, and she had already received her acceptance to Carolina.

Smith, who planned to major in music, had a chance meeting with UNC’s band director, and an impromptu audition that same day on UNC’s campus led to a scholarship offer and a place in the wind ensemble for Smith, playing the euphonium. But it was another chance encounter that would set her on a new path that brought her to a double major, medical school and finally, urologic oncology as a specialty.

“UNC has a system by which they have current undergrads contact potential students, and the person who contacted me was from Pittsburgh, on the wrestling team and a biostatistics major,” she said. “That had piqued my interest – the way I could apply math in interesting ways. [The director and I] met to discuss the potential for a double major.”

Math and science had always interested Smith, so biostatistics was a natural extension of her interest in medicine, something that began when she was in elementary school.

“I always wanted to be a doctor. I liked my pediatrician. He was a great physician, and I liked that he connected with us as a family,” she said. “That stuck with me throughout middle and high school, and it ultimately led to my decision to pursue medicine.”

Another serendipitous phone call landed Smith a job as an administrative assistant in the biometrics consulting lab at UNC Gillings School of Global Public Health, where she worked for more than seven years, learning how to assist and consult with researchers with biostatistical needs, something that solidified her interest in medicine and prompted her to apply to medical school at Carolina.

“I slowly but surely was understanding how to perform statistical analyses,” Smith said. “I met individuals from a variety of fields, including general surgery, gynecology and internal medicine, where I would learn about the clinical side of medicine from physician researchers. I learned on the job how to be a biostatistician, a researcher and what it meant to be a clinician.” 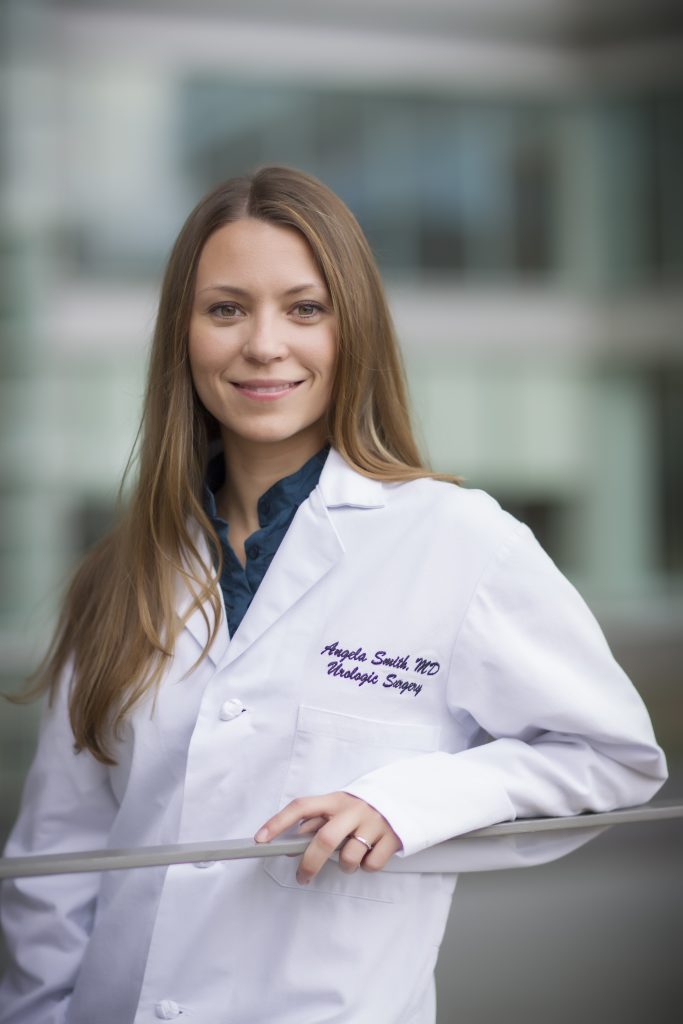 Medical school opened new intellectual doors for the naturally curious Smith, and it was there she discovered urologic surgery, then urologic oncology, leading to her current position as director of urologic oncology at UNC Lineberger.

“I realized that I really enjoyed urology. Our specialty takes into account quality of life and personal preferences, and we often see our patients throughout the rest of their lives, allowing us to develop long-standing relationships” she said. “Urology was a perfect blend of the relationship I really liked as a clinician, combined with my interest in the technical skill of surgery.

“When I began training, not much research was being conducted in bladder cancer. Our program had the unique position of being a leader both in the field of bladder cancer as well as innovation in the form of robotic surgery,” Smith said. “I think those two elements influenced my initial interest in bladder cancer, and it was further strengthened by the fact that I could blend quality of life and cure, tailoring treatment plans to the patient’s goals of care.”

But Smith’s interest in her patients doesn’t stop once they are off the operating table or leave her office. Her past experience with researchers and their work prompted her to pursue her own research, into patient reported outcomes. Working with Ethan Basch, MD, MSc, the Richard M. Goldberg Distinguished Professor in Medical Oncology and director of the cancer outcomes research program, and Gita Mody, MD, MPH, in the division of cardiothoracic surgery, Smith said studying patient reported symptoms once they leave a clinical setting is a good indicator of how clinical work can affect research.

“I’ve found that patients often don’t know what symptoms should be expected versus what should be addressed by the clinical team,” Smith said. She is interested in looking at post-operative symptoms and creating an electronic alert when symptoms pass certain thresholds in patients recovering from bladder removal surgery and working with Mody in that same vein with lung cancer patients.

“What I’d like to do as a team is to study it collaboratively, and learn how we could implement it in a way that doesn’t further widen disparities in care for our patients,” she said.

Collaboration with colleagues is one of Smith’s favorite aspects of her job, and she said she couldn’t be as successful without her team and the support of UNC Lineberger.

“I love the culture of UNC. I feel valued as a clinician, as a researcher, and as a mentor and mentee,” she said. “Some individuals succeed because of rather than in spite of … . In my case, my success is because of support from every level — UNC Lineberger, my colleagues, my research partners, and most importantly my patients. I appreciate the people around me, and I feel like my group works well together, supports each other, and grows together in a way that is unique to our institution. There’s something intangible that keeps me here.”

Smith said it’s very difficult for her to imagine ever leaving UNC, and her family is part of the deep roots she’s put down in North Carolina. Her husband, whom she met by chance during her freshman year at UNC, is from Chapel Hill and works as a clinician and researcher at Duke. And the similarities don’t end there. He is also a musician and plays in a band, and they often play music together when they aren’t outside biking with their two daughters, 5 and 7. Smith said they also enjoy picking new restaurants to visit and trying new foods. With the pandemic, though, they’re enjoying more backyard picnics these days, but it’s the time spent with her family that really matters to Smith.

“My favorite hobby is thinking about personal growth. I want to be as efficient as possible, with both my time and energy. If I’m more efficient, it means I have more time and energy to share with my patients and my family. Time and energy are our most precious resources,” she said.