When they talk about their plans to develop a personalized and adaptive immune-based cancer therapy, Ben Vincent, MD, and Jared Weiss, MD, do not beat around the bush.

They say an upcoming clinical trial is their shot at curing lung and head and neck squamous cell carcinomas – cancers linked to smoking.

“Once you have the best idea you can have, you go all in and you try to cure cancer,” Weiss said. “That’s what we’re doing.”

Vincent and Weiss are in the final stages of launching a clinical trial for a therapy they’re calling PANDA-VAC, which stands for “personalized and adaptive vaccine.”

In this experimental approach, they are looking to develop personalized vaccines to trigger patients’ immune systems to fight their own lung cancer and head and neck cancer.

They have passed two of the key regulatory hurdles and are planning to launch the trial this spring for a small group of people.

“We’re actually trying to figure out in each individual patient: How is the cancer evolving to resist our therapies, and can we be out in front of that until all of the cancer cells are gone?” Vincent said.

Initially, it was a love of sushi that brought Weiss and Vincent together to hash out their idea. But there were several other factors that allowed them to partner on the clinical trial. 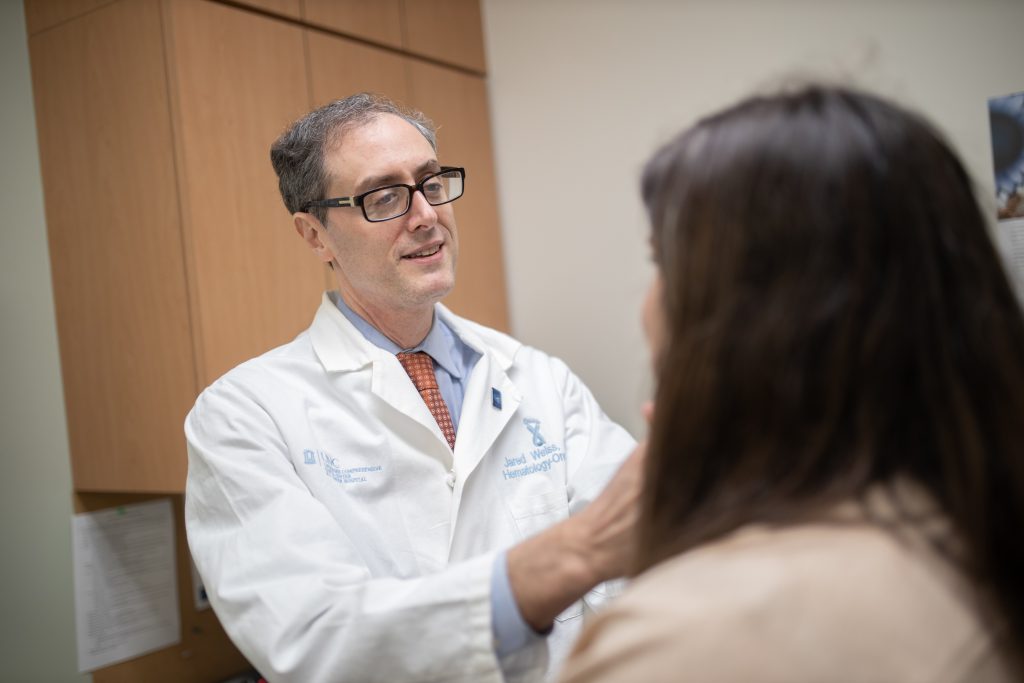 Weiss is a medical oncologist specializing in lung and head and neck cancer. He is the national principal investigator for multiple clinical trials for new therapies.

A self-described “big-time nerd,” Weiss credits a love of people and a clumsiness in the laboratory in his decision to become a doctor.

At Yale School of Medicine, his decision to become an oncologist was one of just two that he’s made based on intuition (the other being the decision to marry his wife). He knew when he met his first cancer patient.

“I had an overwhelming feeling that these were the people I wanted to serve,” said Weiss, who is now an associate professor in the UNC School of Medicine and associate director of finance for the UNC Lineberger Clinical Protocol Office.

He saw a major need to improve care for patients with lung cancer. Since then, he’s seen major advances in targeted treatments and immunotherapies. But still, there is tremendous need for improvement.

In North Carolina, lung and bronchus cancer is the leading cause of cancer death, according to the N.C. State Center for Health Statistics.

“It’s no accident this is our chosen work,” Weiss said. 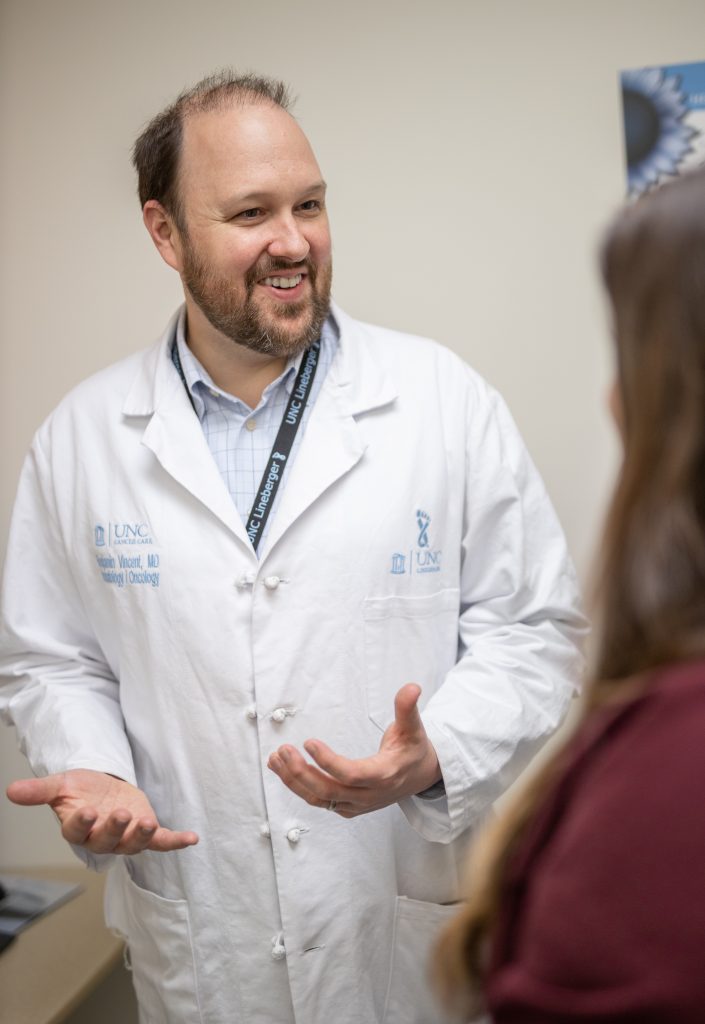 Vincent was a philosophy major at UNC-Chapel Hill who said he went to medical school because he “couldn’t make a living as a fiction writer, which was my original career plan.”

“I liked helping people, and I had some friends and family who said ‘you like thinking about problems, and you like making a positive impact on other people’s lives, that’s what doctors do, so you could try to go to medical school,’ ” he said.

He developed a deep interest in immunology while attending the UNC School of Medicine, and he trained in the immunology laboratory as much as he could.

Like Weiss, he decided to become a medical oncologist after meeting cancer patients as a student.

“I saw their grace under pressure, the capacity to develop deep, meaningful relationships with them in a small amount of time, the importance of interacting with them as people … ,” he said.

As a physician-researcher, Vincent both cares for patients and runs a lab focused on cancer immunology research. His lab has conducted many preclinical studies to understand how to deliver cancer vaccines.

Immunotherapies have been developed and approved in the United States to fight lung cancer, melanoma and other disease types. Known as “checkpoint inhibitors,” Weiss likened the mechanism of these immunotherapy treatments to “pouring gas on the fire;” they help boost the immune system’s response against cancer. 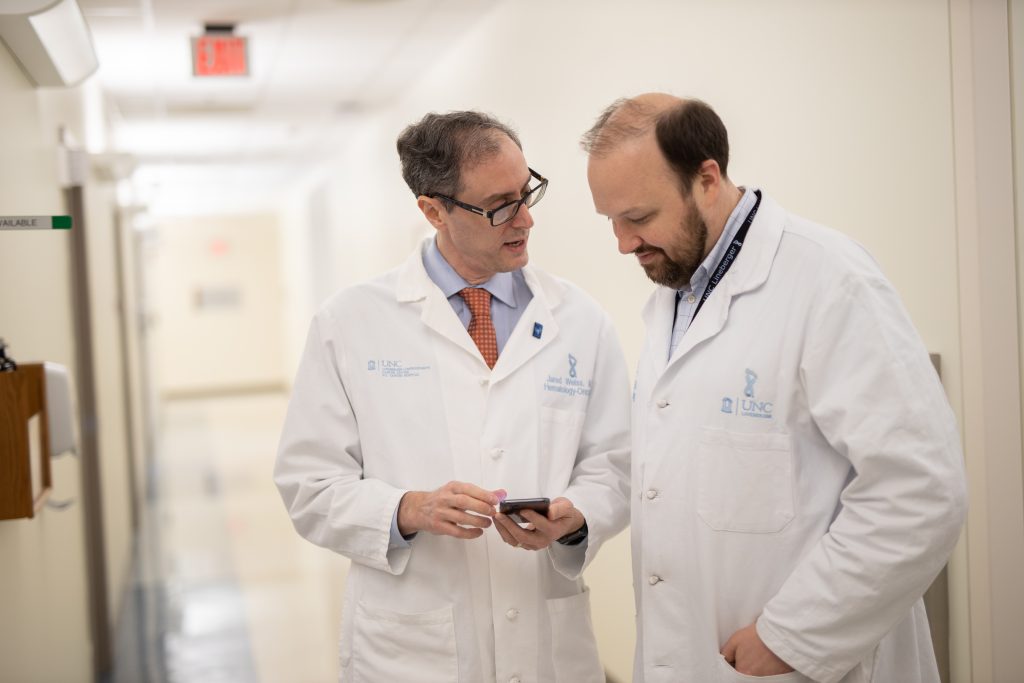 But he said the PANDA-VAC approach is an attempt to get the fire going in the first place.

“If you don’t have a fire to begin with, it doesn’t matter how much you amplify it,” Weiss said. “PANDA-VAC to me is an attempt to start that fire.”

To create experimental vaccines against cancer, researchers first sequence the DNA in a patient’s tumor.

They use that information to find signatures within the cancer cells’ DNA that make them unique. Those signatures could indicate the tumor produces an irregular marker known as a “neo-antigen” that they could use to help the immune system recognize the cancer.

Once they have identified potential neo-antigens within the cancer cell, they generate an experimental vaccine using protein fragments of the irregular cancer marker. The approach is not only personalized but also adaptive.

They want to be able update the therapy as the patient’s tumor adapts and tries to evade the therapy.

“Our idea is we can improve therapy not just by giving this personalized product, but by continuing to study the patient’s cancer through blood samples and targeted biopsy, and then changing the vaccine so when the cancer changes, we change to adapt to it,” Weiss said.

While they are planning to launch an initial, proof-of-concept clinical trial of this therapy, they want to use their approach for more treatments in the future. They are hoping to make a transformative impact.

As important as the outcome of the trial is, both men enjoy time spent outside the lab, too. Weiss roasts his own coffee and enjoys photography, while Vincent likes reading novels and writing short stories. Residents of Chapel Hill, both Vincent and Weiss are fathers to three children each and make spending time with their wives and kids a top priority.