Retirement goals usually include cashing in 401k accounts, moving to the beach or taking a trip. Unless you’re a dog. Shep, a 12-year-old golden retriever, is more likely to be hanging out with his owner, Bill White, and taking some serious naps now that he’s retired from his job as an emotional support dog.

For the past two years, Shep and White have been making the rounds at the N.C. Cancer Hospital, the clinical arm of UNC Lineberger Comprehensive Cancer Center, taking time to visit cancer patients who may need a pick-me-up. 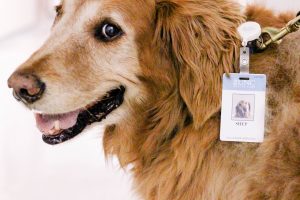 Shep and White are part of the Tar Heal Paws, an animal assisted activities and therapy program that delivers support and companionship for patients and visitors at UNC Hospitals.

“I really do think he understands what he’s doing. I think he gets it. These dogs are so smart,” White said. “I can say ‘Shep, it’s time to go to work,’ and I think he really knows what we’re getting ready to do.”

Shep is beginning to show his age with some gray around his muzzle and a slower gait than is typical with such a rambunctious breed, so White decided the time was right for him to hang up his leash and spend some time just being a dog.

While Shep is ready to spend more time at home, White isn’t ready to hang up his volunteer hat just yet and has another dog in mind that could step in now that Shep’s retired.