Sascha Tuchman, MD, MHS, had high-flying career goals even when he was young. He grew up in the ‘80s in Long Island, New York, and knew without a doubt what he wanted to be when he grew up – a fighter pilot, just like Maverick in “Top Gun.” Luckily for the medical field, he kept his feet on the ground and went into medicine instead, specializing in hematology, and specifically multiple myeloma and amyloidosis at UNC Lineberger.

“Flying jets wasn’t the most practical career path,” he said of his childhood aspirations. “I eventually was more interested in science, but I didn’t really gravitate toward lab research. I wanted more contact with people.”

Tuchman went to medical school at Georgetown University and did his residency, chief residency and fellowship at Duke Medical Center. He became interested in cancer as a specialty while he was an internal medicine intern working on the blood cancer service.

“I realized I wanted to do something in academic medicine, both in patient care and research,” he said. “I wanted to specialize, but I really enjoyed general medicine and taking care of the whole body, not just specific organs.” That holistic mentality led Tuchman to infectious diseases and hematology/oncology, both of which require one to be a good, general internist and also have specialist expertise. He then embraced the idea of developing drugs to treat and cure cancer one day and turned to hematology/oncology.

“Mentorship also made a huge difference,” he said. “Amazing mentors, such as Dr. Jon Gockerman, epitomized the academic physician I wanted to be and led me down my current path.”

Tuchman was on faculty at Duke in 2016 and already well aware of UNC Lineberger’s work in groundbreaking research such as chimeric antigen receptor T-cell (CAR-T) immunotherapy, when he was approached about a possible move to UNC by Jon Serody, MD, the Elizabeth Thomas Professor of Medicine, Microbiology and Immunology and division chief of hematology.

“I visited UNC and quickly fell in love with it,” he said. “The research programs were vibrant and unique. UNC Lineberger was an academic medical institution actually developing its own CAR-T, for example. Very few universities can say that. And the fact that I could come to UNC, build the myeloma program clinically, and be heavily involved in myeloma CAR-T studies and other amazing research opportunities? Without moving my family? Of course I jumped. I thought I could help with advancing some huge developments in improving outcomes in multiple myeloma. What a chance to make an impact.”

In his five years since coming to UNC, Tuchman’s vision for the program has been to collaborate with other UNC Lineberger clinicians and scientists to grow the research, expand the myeloma team, and cultivate the next generation of myeloma experts.

Regarding research, he has thoroughly enjoyed finding collaborators in unexpected fields. As an example, Tuchman is working with UNC Lineberger’s Chad Pecot, MD, a lung cancer specialist. Lung cancer and multiple myeloma are very different diseases, but Pecot is conducting innovative laboratory research  focused on developing RNA-based therapeutics that can suppress protein synthesis in cancer cells. That’s something Tuchman thought could be used in multiple myeloma to suppress abnormal proteins, which are a key cause of the problems myeloma causes in patients.

“It’s been a really fruitful collaboration [with Pecot] where we have some interesting medications that we will someday hopefully put into clinical trials to help patients,” he said. 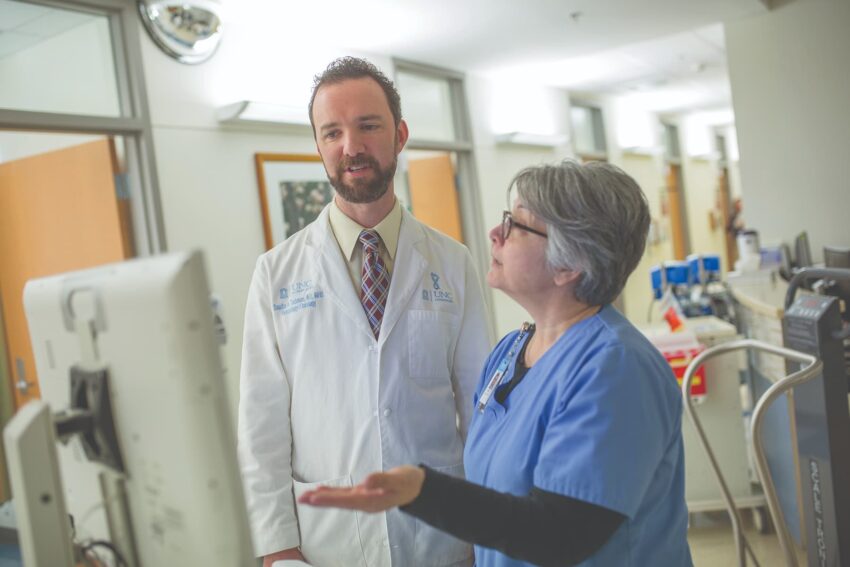 Tuchman is also creating clinical collaboration in a team setting to treat patients. He is particularly proud of the monthly multidisciplinary clinic they established for amyloidosis, a rare, often fatal disorder that affects many different organs. UNC has long been a national specialty referral center for amyloidosis, but more recently, UNC has joined only a handful of other centers in the U.S. with an in-person, multi-specialty amyloidosis clinic.  A team of physicians specializing in areas like hematology, cardiology, neurology and nephrology sees patients on the same day in the same place. Since patients often come from very far away, they appreciate being able to take care of all their appointments in one trip. The clinic has been so successful, that they’ve been asked to give talks to other organizations about its logistics.

“Trips to UNC can be really difficult for patients, because they often don’t feel well, and they live far away. In our clinic, once a month, all the specialties are there to all evaluate the same patient in real time. It’s much easier on the patient and great for us physicians because we can discuss a patient right there and formulate a comprehensive, multi-specialty clinical plan for the patient,” he said. Tuchman notes that his colleague and mentee, Sam Rubinstein, MD, has taken the lead on this novel and important initiative.

Private philanthropy helps make some of these big ideas possible, and Tuchman said the flexibility private funding provides his team is extremely valuable. The myeloma CAR-T study, for example, is happening entirely with private funding, which Tuchman hopes will result in new treatment options and better outcomes overall. Funding has also launched a broad research initiative into a patient registry. 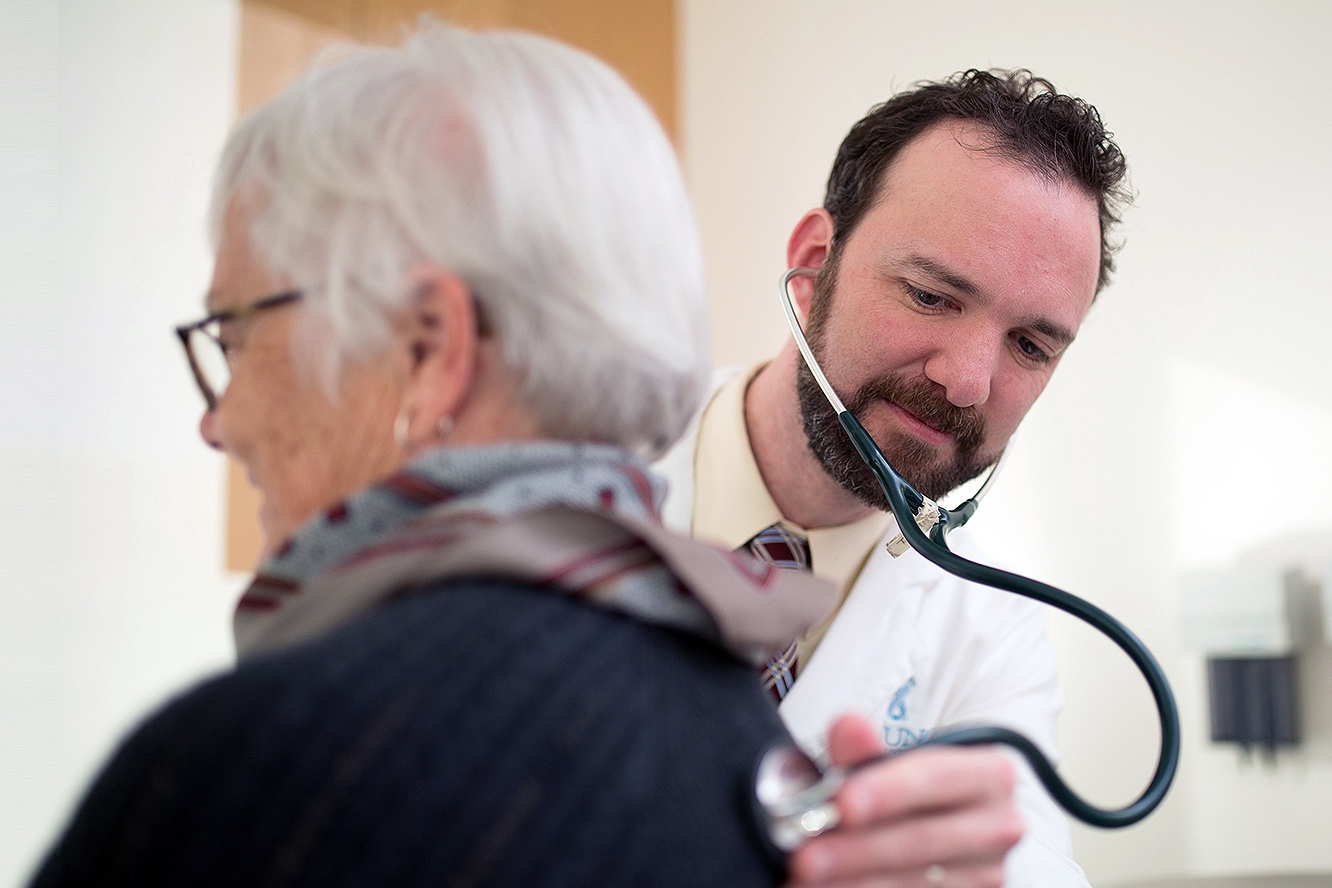 “Philanthropic dollars have also enabled us to create a one-of-a-kind registry for all patients being treated for myeloma, amyloidosis, or other related conditions here at UNC,” Tuchman said. “We track over time how they’re doing clinically, how their quality of life is, how they feel, energy patterns, sleep, functional impairments, and so forth. We freeze blood samples for analysis later, and we do geriatric assessments. This is the most comprehensive registry in multiple myeloma in the world; to my knowledge there’s no other registry in existence that has the breadth and depth of data we have with the patients we’re following.”

Tuchman notes that the registry is a vital resource scientifically, and it has also been instrumental in developing future myeloma physicians. Students and medical trainees including fellows doing specialized training in myeloma and amyloidosis have studied data from that registry to learn how to conduct that type of research and also publish high-impact science.

“They’re advancing the field while also gaining the skills to do this on their own someday,” he said. “That road to independence is critical. They’re the next generation.”

‘The next Dr. Tuchman’

Outside the clinic, Tuchman is a husband and father of three boys, and he enjoys spending time with his family, traveling and learning new languages. He became a Peloton devotee during the pandemic when he wasn’t able to play ice hockey as often as he wanted. Now that traveling is an option again, Tuchman and his wife were able to journey to a new favorite spot, Whistler in Canada, to ski and enjoy time together.

While two of his sons don’t see medicine in their future, his youngest son said he wants to be a UNC hematologist when he grows up, just like his dad.

“He’s 11, and we joke about him coming to clinic now and helping me as a junior hematologist. The funny thing is that if he did go through with it, he’d be finishing training right around when I might retire. He could take over for me as the next Dr. Tuchman. Patients wouldn’t have to learn a new name.”