Breast cancer is a known enemy in Peggy Morrell’s family. It’s the devil they knew, until they didn’t. When Morrell’s daughter, Tracey Roberson, was diagnosed with breast cancer in 2009, it brought with it a change in outcome, a deviation from the expected path and a devastating loss.

Morrell survived breast cancer, and so did her mother. When her daughter’s breast cancer was caught during a routine mammogram screening, Morrell and her family thought they knew how everything would play out.

Unfortunately, not everything went as expected.

Just past the five-year mark of her original diagnosis, Roberson felt a pain in her back during an exercise class and went to the doctor. Tests revealed her cancer had not only returned, it also had spread to her spine, liver and reproductive organs. Roberson passed away in 2016 of her cancer, and Morrell and her family had to carry on and pick up the pieces left in her absence.

“I remember the day Tracey came home and said it had metastasized,” Morell said. “I think the world stopped. This isn’t the way isn’t supposed to go. It was not what we thought we’d hear.”

Morrell said her daughter had always been a cheerleader and a fighter for the breast cancer cause, and Roberson and her husband, Ed, and Morrell and their family had all participated in local breast cancer advocacy races and other events in the past.

But this year, Morrell wanted to do something different. She recalled how fond Roberson had been of her physician, UNC Lineberger’s Fran Collichio, MD, and decided to raise money for breast cancer research at UNC Lineberger. 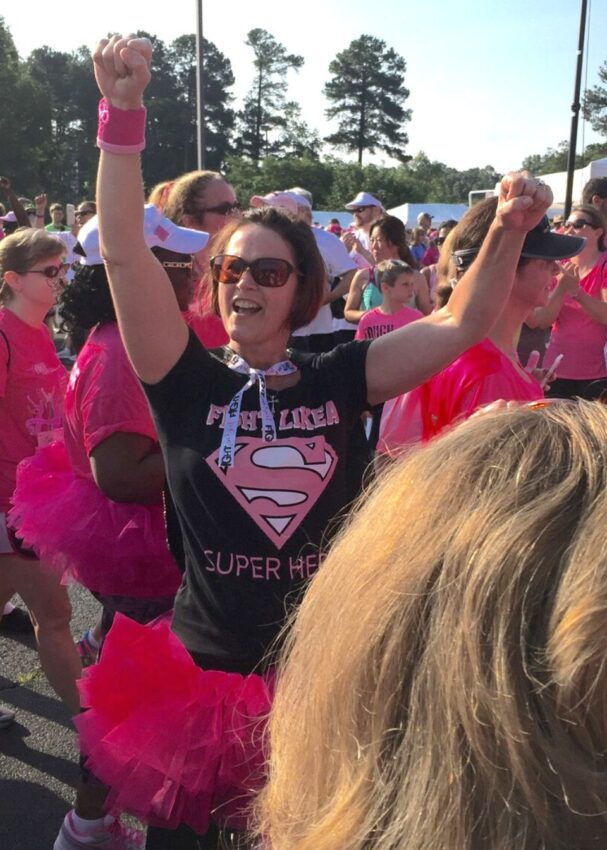 “Tracey always wanted to give back, and I can’t think of anything that has more purpose in our lives than breast cancer research and finding a cure.”

“Tracey knew the importance of medicine and research and how they went together. She believed in it very strongly,” Morrell said. So this year, as part of UNC Lineberger’s October Power of Pink giving campaign, Morrell wants to raise funds for breast cancer research and to help educate people about the importance of breast cancer screenings in her local community of Mebane, North Carolina.

She’s secured a booth at Downtown Mebane Autumn Fest, on Oct. 1 from 10 a.m. to 5 p.m. at 118 W. Clay St. Morrell will be raising funds online throughout the month of October and at the booth, and she hopes to have raffle items, as well.

Morrell said this is the best way to honor her daughter’s legacy and her leadership.

“Tracey always wanted to give back, and I can’t think of anything that has more purpose in our lives than breast cancer research and finding a cure,” Morell said. “UNC Lineberger was a resource for her. It shows our appreciation for her, too. Lots of parents who lose children will take that loss and make it meaningful and personal to them.”

Support the Power of Pink Campaign