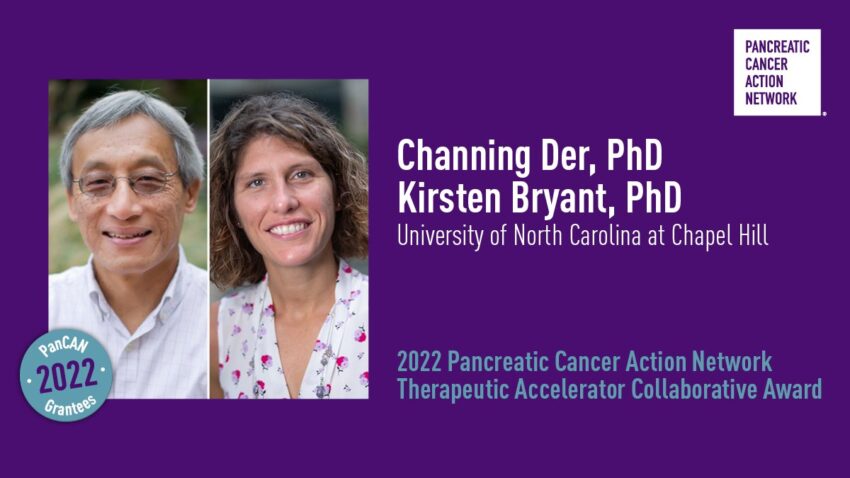 UNC Lineberger’s Channing Der, PhD, and Kirsten Bryant, PhD, are among seven recipients of the inaugural Pancreatic Cancer Action Network (PanCAN) Therapeutic Accelerator Collaborative Award, which provides a total of $340,000 in grant support over two years. The award will help fund ongoing early-phase clinical trials testing a pair of investigational agents—VS-6766 and defactinib—in combination with the standard regimen of gemcitabine/nab-paclitaxel in patients with metastatic pancreatic cancer.

In prior studies Der and Bryant have found that inhibiting signaling generated from mutant KRAS in pancreatic cancer cells causes the cells to eat themselves for nutrients to survive. This process, known as autophagy, is the central focus of the team’s research project, entitled Determination of Novel RAF/MEK and/or FAK Inhibitor Combinations in KRAS-mutant PDAC. Clinical trials will test the efficacy of autophagy-blocking drugs combined with drugs that block signaling “downstream” of the proteins MEK and ERK.

Der and Bryant are conducting experiments on lab-grown cells and 3D organoids that represent a lab-based model of the tumor and its microenvironment. Additional cell-based experiments conducted within their lab will explore the impact of VS-6766 and defactinib treatment on pancreatic cancer cells that express different mutations of KRAS. Whereas KRAS mutates in nearly all pancreatic tumors, different parts of the gene and resulting protein get mutated, causing diverse cellular behaviors and varying sensitivity to targeted therapies.

The team will also introduce innovative direct KRAS inhibitors to their treatment regimen to monitor effects in cells with different versions of mutant KRAS. Data generated from this project will guide future combination approaches involving VS-6766 and defactinib and help determine whether tumor biology can identify subsets of patients for whom the treatment may be especially beneficial.

“We’re thrilled to have PanCAN’s support in continuing our research on behalf of UNC Lineberger,” Der said. “It’s an honor to be among those to receive the first Therapeutic Accelerator Collaborative Award, which we believe will consistently fund important work that raises the ceiling on what we can do in labs and clinics around the globe to address pancreatic cancer.”

Supported by the 1440 Foundation and the Gail V. Coleman-Kenneth M. Bruntel Research Fund, the Therapeutic Accelerator Collaborative Award, worth more than $2 million, is a result of the partnership between Verastem Oncology, PanCAN and the academic community to “further study and understand the investigational treatment combination and consider strategies to enhance its effectiveness.” Both Der and Bryant have previously received PanCAN research grants, and Der serves on the organization’s Scientific & Medical Advisory Board.