When she got out of the car at a gas station in North Carolina during a summer road trip in 2017, Donielle DuBois said the heat hit her like a wave.

She and her mom had been driving for more than two days from Sioux Falls, South Dakota, to get to Chapel Hill. It was a bucket list item for her mom, Rozanne DuBois, to take a road trip, so they had stopped in Missouri to visit family; in Nashville, Tennessee, to visit museums for two country music legends; and in Asheville, North Carolina, to get a glimpse of the Biltmore Estate.

“It was a different kind of hot,” Donielle DuBois said. “I also never care to spend an extended period of time in North Carolina again in July,” she joked.

The trip wasn’t just for sightseeing.

DuBois had traveled to the North Carolina Cancer Hospital in Chapel Hill to receive chimeric antigen receptor T-cell (CAR-T) immunotherapy for her Hodgkin lymphoma, which had recurred after being in remission for almost four years.

The treatment was part of a phase 1b/2 clinical trial led by UNC Lineberger Comprehensive Cancer Center’s Natalie Grover, MD, clinical director of the Cellular Therapy Program, and Anne Beaven, MD, director of the Lymphoma Program, to study the safety of the CAR-T therapy for patients with relapsed or refractory Hodgkin lymphoma and for non-Hodgkin lymphoma positive for the CD30 cellular marker.

CAR-T therapy involves extracting specific immune cells from patients, engineering the cells in the lab to hunt tumor cells displaying a specific molecular target, and then re-infusing them back into the patient to fight their cancer.

UNC Lineberger is one of a select few academic centers in the United States — and the only center in North Carolina, Georgia, South Carolina, Tennessee and Virginia — with the scientific, technical and clinical capabilities to identify new tumor targets and then develop and infuse novel CAR-T immunotherapy. It currently has nine CAR-T trials open, including for the treatment of Hodgkin and non-Hodgkin lymphoma, multiple myeloma, neuroblastoma and leukemia.

DuBois was patient No. 8 in the clinical trial. She had a negative reaction to the initial chemotherapy regimen prior to the infusion of CAR-T cells, which required intensive care, but she was able to stay in the trial.

She said the treatment experience was “much easier” than the treatment she’d been through previously. The initial diagnosis had come “out of left field” 10 years ago when DuBois was 25. She received chemotherapy, radiation and a stem cell transplant before her cancer went into remission in 2012. 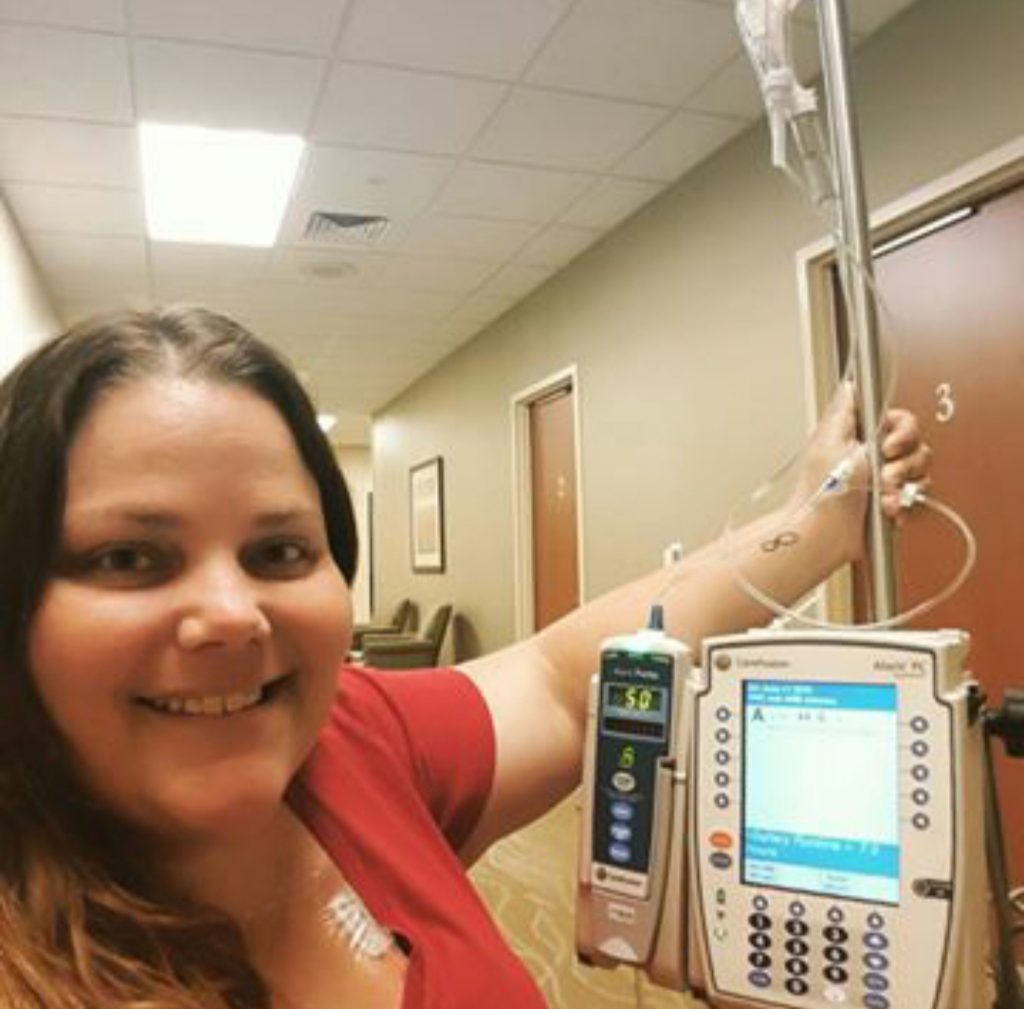 After she relapsed in 2016, she received immunotherapy treatments known as checkpoint inhibitors that weren’t available when she was first diagnosed. She was excited to learn about the clinical trial at UNC-Chapel Hill when she relapsed again.

“I feel like I sailed through it,” she said of CAR-T treatment, explaining that she was able to work part-time while she was in Chapel Hill, go to movies and walk around Costco. She stayed at the SECU Family House after she was released from the hospital but returned weekly for checkups before she left in early August of 2017 – about a month later.

It has been more than two years since she got the CAR-T therapy, and the cancer is still in remission.

“I am super excited that they continue to have advances in cancer treatment, and it seems like I’ve been lucky enough throughout my two journeys; they have just been timed right that different treatments have been available to try,” DuBois said.

UNC Lineberger’s results from the trial are pending publication, but researchers say preliminary data are promising, particularly when they used a specific chemotherapy regimen – known as a lymphodepletion – prior to infusion of the CAR-T cells.

“Most of the patients on trial had progressed on previously approved therapies,” said Grover, who is an assistant professor of medicine at the UNC School of Medicine. “This treatment was well-tolerated, and these are patients who had really refractory disease.”

The experience has made DuBois realize the meaning of the phrase you “only live once.”

After she entered remission following the CAR-T therapy, she underwent weight loss surgery, which revealed a slow-growing neuroendocrine tumor in her stomach. She said she was fortunate that they found it before it was too late.

She now works two jobs. She loves going to see her favorite artists in concert and recently saw Post Malone in Omaha, Nebraska. As a “huge” sports fan, she also drives to watch the Minnesota Twins play in Minneapolis and has also seen her favorite Dallas Cowboys play in Dallas; Tampa Bay, Florida; Chicago; Minneapolis and Green Bay, Wisconsin.

She also enjoys traveling and is looking forward to taking a trip with her friends to the Florida Keys.

She is grateful to her oncologist in Sioux Falls, whom she thinks of as her “hero,” and her mom, who has supported her through it all. She continues to be positive and upbeat because she’s a glass half full person, and “what’s the alternative?” she asked.

“People can always say, ‘you only live once, don’t take any day for granted,’ ” DuBois said. “People say that, but I don’t think they truly understand what that means unless they’re faced with a life or death situation. That’s one thing I’m definitely wide awake to.”

Learn more about the CAR-T Immunotherapy Program at UNC Lineberger