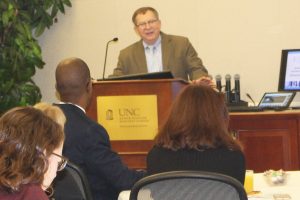 UNC Lineberger’s Hyman B. Muss, MD, co-chaired the center’s annual geriatric oncology symposium.Researchers from a range of medical disciplines and institutions gathered at the UNC Lineberger’s Mary Jones Hudson and Thomas Hudson Geriatric Oncology Symposium to discuss research in a field that is on the “growing edge” of cancer therapy.

The annual symposium was held at the Rizzo Center in Chapel Hill to highlight new research in geriatric oncology. Co-chaired by UNC Lineberger’s Jan Busy-Whitehead, MD, the Mary and Thomas Hudson Distinguished Professor of Medicine in the UNC School of Medicine, Trevor Jolly, MBBS, assistant professor in the UNC School of Medicine, and Hyman Muss, MD, the Mary Jones Hudson Distinguished Professor in Geriatric Oncology, the symposium was hosted as a tribute to Arti Hurria, MD, FASCO, a national leader in the field of geriatric oncology. She died in an automobile accident in November. UNC Lineberger Director H. Shelton Earp, MD, said her death was a “terrible loss” for the field, which is an area that is important, and will increasingly be so.

“You just have to look at what’s happening in our population … to understand this is the growing edge of cancer therapy and survivorship, and yet people (weren’t) studying it in a way that is rigorous,” Earp said.

Earp also highlighted the program’s leadership under Muss. UNC Lineberger recruited Muss in 2009 to oversee its geriatric oncology program and to initiate more clinical research for this population, which historically has been underrepresented in clinical trials in the United States.

“I really look forward to this symposium every year, and UNC Lineberger being among the leading programs in the nation in geriatric oncology,” Muss said.

He also paid tribute to Mary Jones Hudson and Thomas Hudson Jr., who have been involved in supporting two professorships at the UNC School of Medicine. Thomas Hudson was a naval officer in World War II, and studied accounting at UNC-Chapel Hill before joining the accounting firm that became Deloitte. He died in November in Chapel Hill.

“Mr. Hudson passed away before the symposium, but his thoughts were with us,” Muss said.

Among the symposium’s presenters was UNC Lineberger’s Katherine Reeder-Hayes, MD, MBA, assistant professor in the UNC School of Medicine. She discussed findings from studies that used “big data” to help inform clinical care decision for older adults with cancer. Older adults are at-risk for non-standard care, Reeder-Hayes said, noting they are under-represented in clinical trials. This is an area where comparative effectiveness can play a role, she said, since there is a large amount of data available through Medicare data.

“Cancer is a disease of aging, which means that as we talk about population-based research in cancer, if you leave out people over the age of 70, you’re leaving out half of people with cancer,” she said.