As a standout high school athlete, Troy Ennis knew how to make his body stronger, faster and more efficient for the football field. So when he felt pain in his ankle that he couldn’t explain by his regular workouts and games, he knew something wasn’t right.

It was early in 2021 when Troy was first seen by doctors and did physical therapy to help resolve his ankle issue, but nothing seemed to work.

“I was missing games, and it finally got to the point where our school recommended I get an MRI,” he said.

The MRI revealed a mass on Troy’s ankle. Tom Ennis, Troy’s father, said their family thought Troy’s problem was bone-related, but a biopsy showed a malignant tumor. Troy was diagnosed with Ewing sarcoma.

“I had no clue what it was,” Troy said. “I didn’t know anyone with it. It’s a really rare type of cancer.”

Troy had a full body scan, and Tom Ennis said the care team found the sarcoma in Troy’s spine and lungs, as well. Troy had chemotherapy and surgery to remove growths in his lungs and is still in treatment.

About 250 children and young adults are diagnosed with Ewing sarcoma each year in the U.S. Approximately half of those diagnosed will ultimately succumb to the disease, pointing to the need for better therapies. Troy is now under the care of Ian Davis, MD, PhD, who studies this rare cancer. Davis and UNC Lineberger’s Pengda Liu, PhD, recently discovered a gene linked to Ewing sarcoma in children, and have identified a potential novel therapy for the disease.

“Ewing sarcoma is characterized by a specific abnormal gene that develops from the breaking and rearranging of two chromosomes,” Davis said. “This abnormal gene creates a hybrid or chimeric protein that works by regulating other genes. Given that the tumor requires this abnormal protein, knowing how to target its activity could lead to a specific therapy for the cancer.”

‘The diagnosis changed everything’

Davis was the right fit for Troy’s care, both for his expertise and his research with Ewing sarcoma. He said in Troy’s case, they take into account what effects the treatment will have on the site of tumor, and try to balance that when dosing with radiation or performing surgery, in the hopes that Troy will retain some function in his leg and ankle. 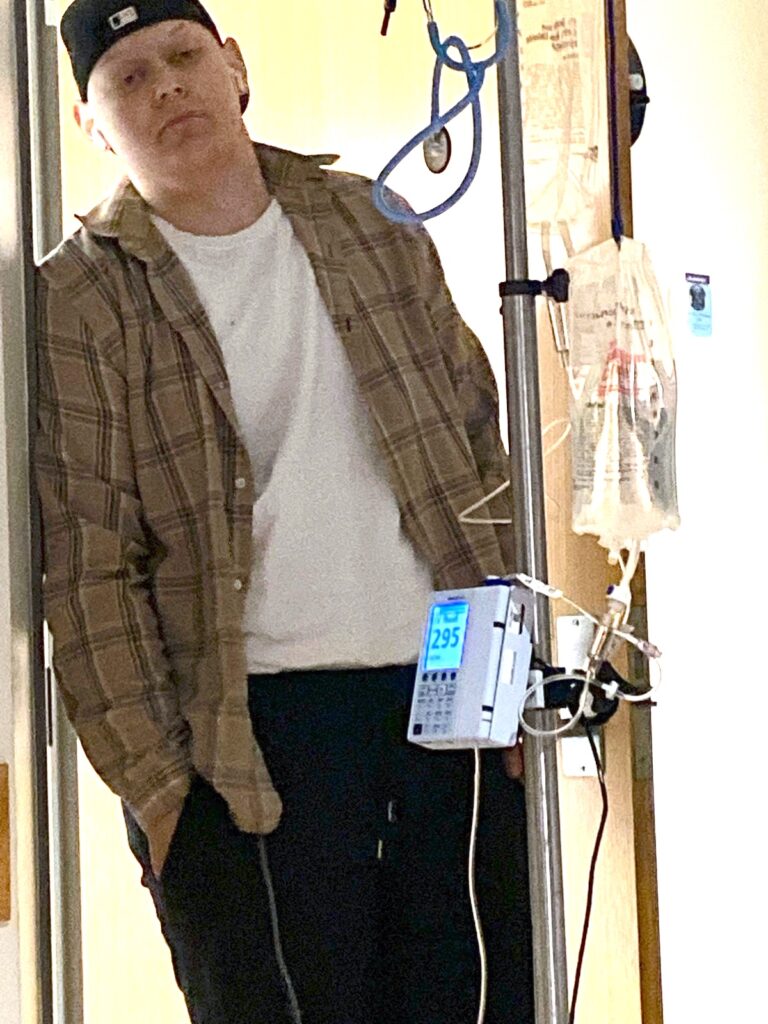 “Ian and his team have been extremely accommodating. He answers all my questions as a parent, and he takes time to walk me through it,” Tom Ennis said. “As a parent and a caregiver, that means something to me. His level of patient education and walking you through all those ‘what ifs’ has been phenomenal.”

Troy’s diagnosis was a curveball for his family. Tom Ennis had heart problems in the past, and his family had experienced the struggles that go along with serious health issues. He was looking ahead to 2021, taking real estate courses as part of a planned career change, but life had other plans.

“Troy’s diagnosis changed everything,” Tom Ennis said. “Troy lost his season. He had trained over a year for this because of COVID, waiting for the season in the fall, but it delayed everything. We were going to buy a new house. All the plans that we thought we had were completely gone by April.”

Troy is candid about his situation. “I didn’t know it was going to be this horrible,” he said. “I’ve talked to other patients, and there’s nothing you can do to distract from how bad the chemo is.”

Their family had endured horrible before, with Tom’s heart issues, and they knew the toll treatment and hospitalization can take on patients and their families.

“We knew it would change things. That part didn’t scare us,” Tom Ennis said. “[Troy] had to withdraw from school this year, and our goal is to get through treatment. After radiation, we hope that’s a start for the new normal.”

Troy’s goal for the new normal is to finish his treatment and to get back to playing middle linebacker and fullback for the Northwood High School football team. His team and local community have been supportive, too, offering emotional and financial support for the Ennis family.

“We got very lucky. Once our friends found out what was going on, they came out of the woodwork to say ‘how can I help?’” Tom Ennis said. “Our family no longer has two working parents, and the situation has changed overnight. The community has really gathered around us and him.”

While cancer has changed things for the Ennis family, some things don’t change. Troy still wants to play football and just wants his life to get back to normal. He has channeled his ferocity and drive on the football field into fighting his cancer instead.

“I never stop being angry,” he said. “There are different ways to get through this, but I’ve found, over everything else, that being angry is the easiest way for me.”

“It gears him up for the fight,” Tom Ennis said. “It’s his mental process of trying to win. You’re not going to hold me back one more day, regardless of what’s in front of me. It’s tenacity.”