Emily Grund’s life changed in the blink of an eye. In less than a day, she went from student-athlete to cancer patient, turning her world upside down. Grund, 21, is on the UNC-Chapel Hill diving team, and she was at practice in September when a teammate noticed a bruise on Grund in the locker room.

“It was a big bruise, and I didn’t remember how I could have gotten it,” Grund said. “I called the trainer, and they said if it got worse, got darker or started swelling to come back.”

The next day the bruise was welted and had tripled in size. And stranger still, Grund noticed new bruises from ordinary activities — sitting in a chair, carrying her backpack. She was brushing her teeth when the dizziness struck.

“I felt like I was going to faint,” she said. “I couldn’t stand up or sit down. I knew something was wrong.”

Grund’s teammates took her to the emergency room at UNC Health, and the diagnosis came back as quickly as her sudden decline. She had acute promyelocytic leukemia, a rare form of cancer.

“I asked my doctor how long I’ve had it, and they said it was only a month. Symptoms are very everyday things, feeling sick all the time, lethargy, fatigue, but more so than usual,” she said. “Not until I was bruising easily and bleeding a lot that I thought ‘something’s off.’ Just because my whole life, I get sick all the time. I’ve always been like that, and I didn’t think anything of it.”

Grund’s parents made the journey from the Dallas-Fort Worth area to Chapel Hill to support their daughter, and her diving teammates were on hand to keep her spirits up. Grund has seen a number of doctors so far, and her care team rotates. She’s seen UNC Lineberger’s Hendrik van Deventer, MD, Christopher Dittus, MD, and James Coghill, MD.

Grund had never heard of her cancer before, and she wants to do something about that. She is sharing her story with other student groups at Carolina to help spread the word to others and support UNC Lineberger’s AYA Cancer program, which focuses on the physical, mental and emotional needs of young adults ages 13-39 with cancer.

“I had no idea about any of it. I needed to spread awareness,” she said. 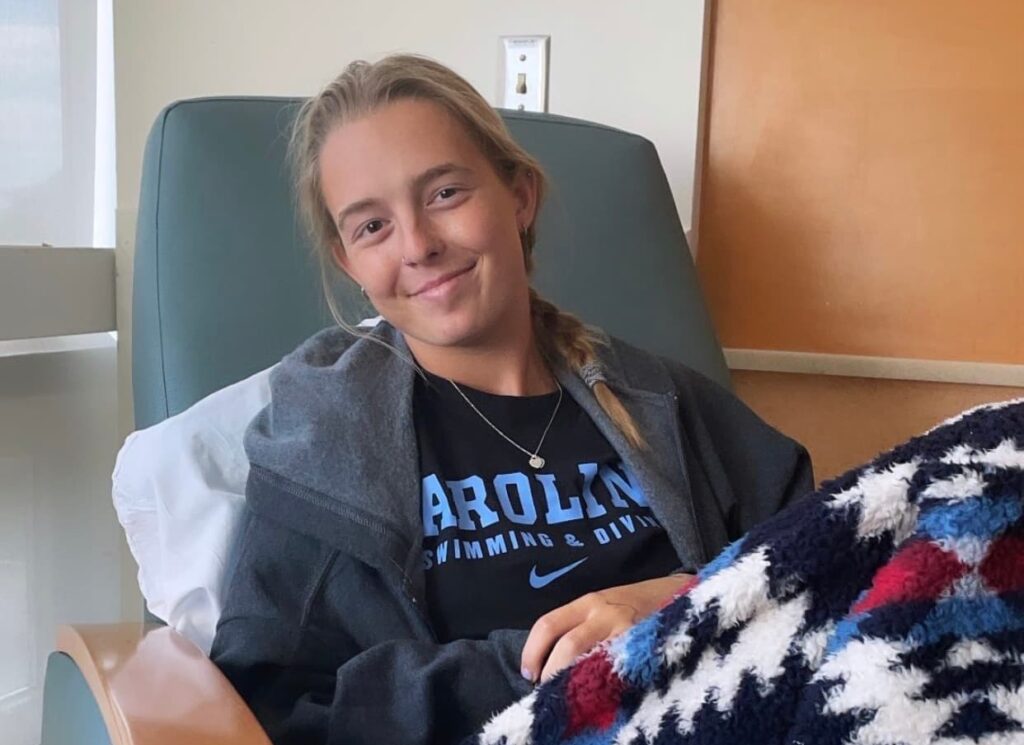 As a young athlete, Grund thinks about her life after cancer, when she will be able to dive again, and how chemotherapy will affect her body. She is able to ask the AYA team questions she’s not entirely comfortable asking her doctors.

“I’m 21, so am I able to have a beer with dinner? They provided a comforting environment to ask those questions,” she said.

What comes next is always on Grund’s mind. She has been diving since she was five, something that’s been a big part of her life and has taken her all over the world. It also brought her to UNC, and Grund said she knew it was the perfect place for her as soon as she visited the campus.

“I fell in love with everything about the school, not just the team, but the campus, and the way people treated people, I loved it all,” she said. 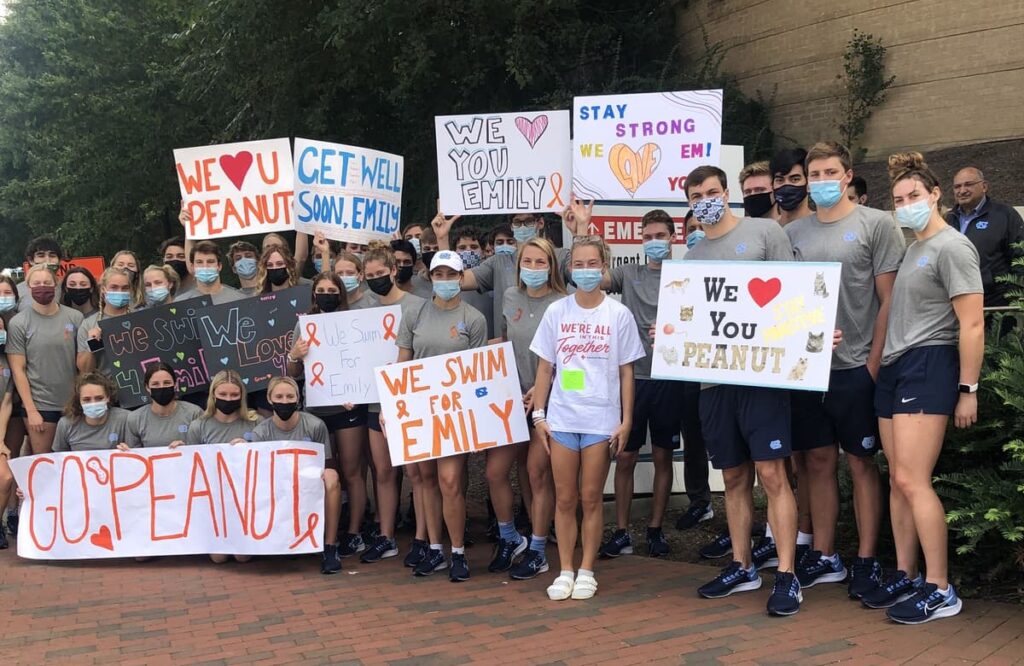 And her team is a great example of the connection she felt when she first visited Chapel Hill. Grund said they were shocked by her diagnosis, but they often visit her in the hospital, bringing dinner and good spirits. The team even stood outside the hospital windows with signs of support for Grund.

“They have been more than supportive. It was a shock to them, but the amount of love and support I’ve gotten from them is amazing,” she said. “If you have a good support system it makes a difference.”

That support is key for Grund. In addition to her parents, who are alternating their visits, she also takes advantage of yoga and mindfulness activities offered by the N.C. Cancer Hospital. She said it helps keep her mind off her cancer and helps with pain relief.

Grund said she has seen herself improving, both mentally and physically as she goes through treatment. She said she’s had plenty of hard days, but she can see herself getting better.

“I’m 21 years old and I have cancer, and it’s a hard pill to swallow, but once you come to terms with it, it gets easier,” she said. “I would think ‘my life is ruined,’ but I know I will move past this and live my life and be fine.”

Grund is currently cancer free and is being monitored as an outpatient at the N.C. Cancer Hospital, but she hasn’t forgotten her journey and all the people who got her there. To help support her efforts to raise funds and awareness for the AYA Cancer Program, please visit unchf.org/splash. 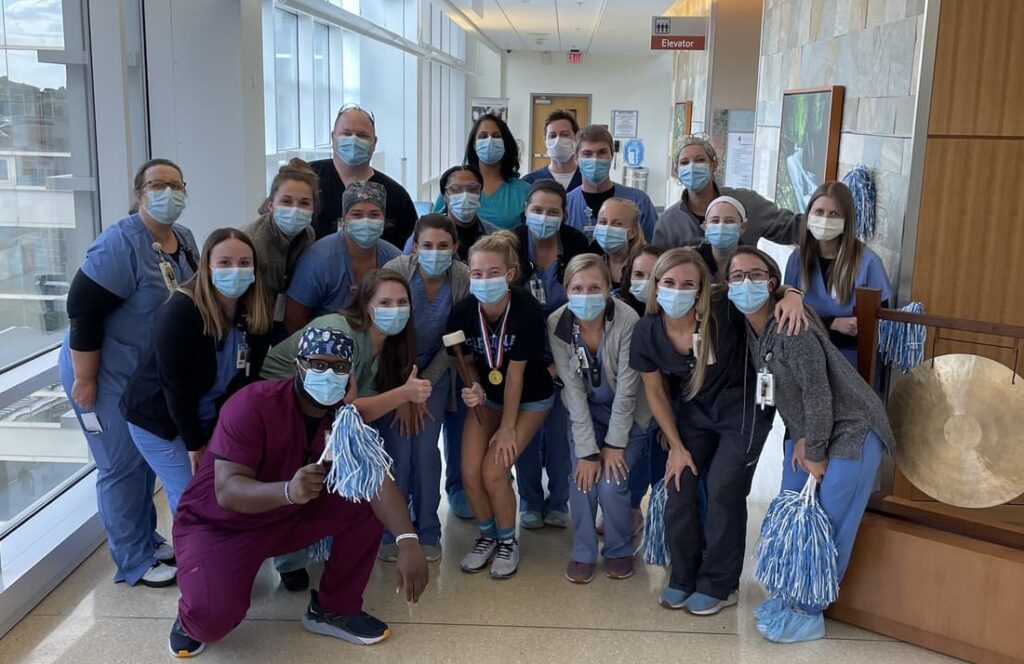