Home / News from Lineberger / The McKays: Making it through cancer as a family

As a first responder, Christina McKay, 31, has seen her share of dire situations but usually from a distance. Christina is a dispatcher at the Johnston County Sheriff’s Office and knows full well that things can go south quickly. But it was her own family that was the one turned upside down when both her husband, Duane, and daughter, Maddilyn, were diagnosed with cancer within months of each other.

It began with then-two-year-old Maddi running a fever that she couldn’t quite get over. Christina took her to see her family pediatrician, who did some tests and sent the family to UNC REX for an ultrasound and a chest X-ray.

“The doctor came in and told us there was a mass the size of a baseball on her adrenal gland, consistent with neuroblastoma,” Christina said. That bombshell hit in October, 2018, and the family sought treatment at the North Carolina Cancer Hospital, the clinical home of UNC Lineberger.

“When Maddilyn’s tumor was found by the radiologist, she said, ‘UNC or Duke, pick one, go to the ER,’ ” said Duane, 36, a lieutenant in the fire department in Archer Lodge, North Carolina, their hometown. “Maddilyn’s pediatrician said UNC, so that’s where we went.”

Instead of spending time with the rest of her preschool class, Maddi, now four, began treatment under the watchful eye of Stuart Gold, MD, the chief of pediatric hematology oncology at the N.C. Cancer Hospital. Over the next few months, Duane and Christina dealt with the fears all parents face when their child is diagnosed with cancer, switching off caring for their daughter and going to work. That stress took a toll on their lives and careers, and in May, 2019, Duane’s energy levels were low, he was pale and drawn, and he had some blood work done. The results were a surprise to everyone — acute myeloid leukemia.

“We were shocked,” Christina said. “I was scared, to be honest, and I didn’t have a plan of what was going to happen. I immediately went over to [Maddi’s] team and had a conversation, and they said they would help with anything I needed.”

When Christina got the news, Maddi was on the fifth floor of UNC Children’s Hospital undergoing her own stem cell transplant. Gold told Christina that he would come up with a plan and coordinate with Duane’s doctors, Joshua Zeidner, MD, and Marcie Riches, MD.

Like his daughter, Duane would require a bone marrow transplant. He had an induction round of chemotherapy to put his cancer into remission, followed by several rounds of consolidation chemo, and finally he received the transplant.

“The world has COVID-19, and living like that is a small glimpse into the life of a cancer patient, especially an immunocompromised one,” Duane said. 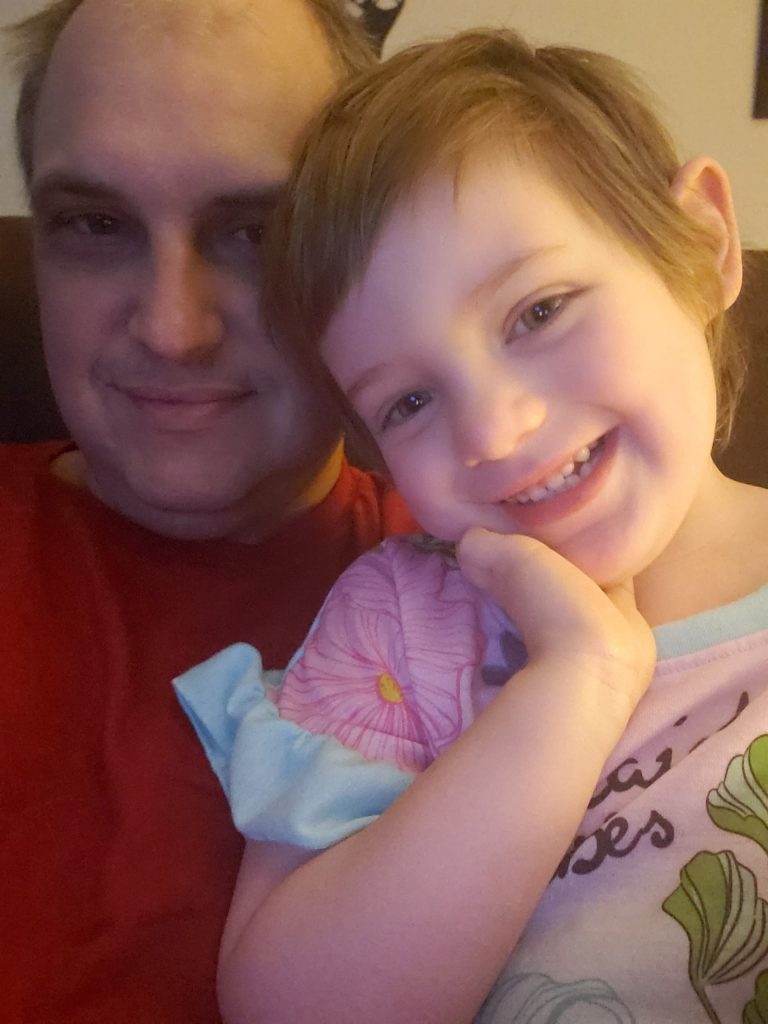 Support from a tight-knit community

Dealing with two cancer diagnoses and the novel coronavirus placed a strain on their family, but the McKays’ tight-knit community pitched in and did what they could to help. As an emergency dispatcher, Christina said the sheriff was supportive of her situation, and deputies paid visits to the hospital. The fire department was involved, too, asking Duane to tell them what his family needed. Fundraisers at their church, a bike ride, a raffle, T-shirt sales and more were dedicated to the family’s needs.

“We’re from a small town, everyone rallied behind us. It’s an extended family,” Christina said. “I’ve always been one to help others whenever they needed it, and for everyone to help, I’m humbled and grateful; we couldn’t have gotten through it without everyone that supported us.”

Duane has now been in remission for more than a year and is nearly a year post-transplant. Maddi completed her treatment in March and rang the bell with Duane by her side, and now the family is looking forward to getting back to some of their favorite activities.

“We love to go to the beach; we haven’t been able to go in two and a half years,” Christina said. “We’re getting back to normal life.”

For Maddi, that means returning to her preschool class and attending church again when it’s safe to go. These days, she’s enjoying painting, doing puzzles, cooking and playing with Barbies, some of her favorite activities. Christina has returned to work, and Duane is hoping to do the same soon. For now, the family is just looking forward to the future.

“You can’t fix anything by going backward. Time doesn’t work like that. You’ll most likely never know what caused [your cancer], so don’t waste time worrying about it,” Duane said. “Always move forward.”