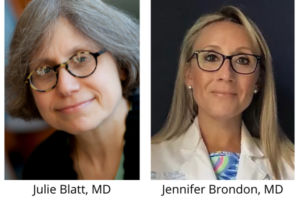 Dr. Julie Blatt, MD, and Dr. Jennifer Brondon, MD, are pediatric hematologist-oncologist specialists within the Vascular Anomalies Program at UNC-Chapel Hill. To better understand vascular anomalies, I recently had the privilege of asking some questions about the program, these diseases, and treatment (The responses were jointly prepared by Drs. Blatt and Brondon).

What is a vascular anomaly?

These are a heterogeneous group of disorders broadly categorized as vascular tumors or vascular malformations. Vascular tumors include both the common hemangiomas, locally aggressive masses, and true cancers. The malformations can be isolated disorders of one or more blood vessel types (veins, arteries, capillaries, or lymphatics) or syndromes in which the malformations are one part. Lymphedema also falls under the vascular anomaly heading. The terminology has been pretty confusing, so the International Society for the Study of Vascular Anomalies (ISSVA) has spent a lot of effort refining a classification scheme (www. issva.org)

What is pediatric vascular malformation? What is the cause?

We see both pediatric and adult patients, and they generally are thought to be congenital and sometimes even show up in utero. Having said that, some vascular malformations are obvious at birth, and others aren’t apparent until adulthood. In most cases, vascular malformations tend to grow with a child and grow disproportionately at puberty and around pregnancies. Although the causes are not always known, a wide array of genetic mutations have been reported, which are thought to be the cause, at least of vascular malformations. These mutations usually are somatic (just within the involved tissues, not in the blood or germ cells, and therefore not heritable). Interestingly many of the mutations involve the same genes which have been associated with cancers–one of the reasons why this group of rare disorders is of interest to oncologists. The natural history of vascular tumors is different.

What are the most common types of vascular anomalies?

The most common vascular anomaly is probably the infantile hemangioma (one type of vascular tumor) seen in several percent of infants. Other vascular tumors and most vascular malformations are considered rare disorders with prevalences of well under 100,000 affected individuals in the US. Having said that, we in pho alone see several hundred patients a year, and our database includes some 800 patients with vascular anomalies.

How are these disorders treated?

Treatment at many centers is multidisciplinary. At UNC, we have maybe 30 individuals from 15 divisions and departments who see patients of all ages. Not every patient needs treatment, tailored to patients depending on their diagnosis and disease complications. To date, there is no curative treatment for vascular malformations. Supportive care can involve compression garments and lymphatic massage (we have a great lymphedema treatment center headed by Val Collins PT, CLT-LANA), pain medications, and anticoagulation. Historically, specific treatment has been with sclerotherapy (putting a catheter directly into the malformation and injecting chemicals that cause some or all the lesion to collapse). This is done by our colleagues in Vascular Interventional Radiology, and Dr. Kyung Kim (who co-directs our Vascular Anomalies Clinic) is our primary pediatric VIR person. More and more, as with cancers, we are using drugs that target some of the mutations that are thought to cause vascular malformations. Sirolimus and alpelisib are two of these, and both were borrowed from cancer treatments. Surgery certainly plays a role in management, and we have terrific colleagues, notably in general, ENT, orthopedic, plastic, and vascular surgery. Unfortunately, even when entire malformations are removed, they tend to grow back. We also have at least two centers of excellence at UNC for vascular anomalies: Dr. Raj Kasthuri of adult hematology directs the HHT (Hereditary Hemorrhagic Telangiectasia) COE, and Drs Beth Nieman of Pediatric Dermatology and Jamie Capal of Neurology direct our Sturge Weber Syndrome COE. The management of vascular tumors also tends to be multidisciplinary. The 2008 discovery that propranolol, a drug with long-standing other uses, can improve or even get rid of infantile hemangiomas, has made treating these disorders very gratifying.

What are your biggest challenges in treating patients with vascular anomalies?

Lots of challenges: in no specific order, 1) difficulties in proper classification, which has a large impact on referrals and treatment; 2) expense, with not always adequate insurance coverage for genetic evaluations and drugs; 3) not enough treatment options (no curative options) at least for malformations; 4) fewer funding opportunities than for, say, cancer research and patient care.

Are there any new education and research missions taking place?

We have a growing network of education and programs. Dr. Kim runs our monthly vascular anomalies patient care conference for providers at all levels of training. All of us interested in these disorders give talks as part of the usual local, regional, and national conferences. Research efforts are growing. These include clinical trials–Dr. Brondon and I currently are site investigators for an international Phase II Novartis-sponsored trial of alpelisib in selected vascular malformations; bench research– We have ongoing collaborations with Dr. William Polacheck (Departments of Biomedical Engineering and Cell Biology and Physiology) using in vitro micromodels of lymphangiogenesis to study effects of different genetic mutations on the development of lymphatic malformations. We also have begun to use his models to study the effects of different drugs on lymphatic malformations. We have a number of other studies in various stages, including a retrospective review with Dr. Jennifer Law of Pediatric Endocrinology on the natural history of lymphedema in Turner Syndrome and a multi-institutional study of the natural history of a rare vascular anomaly syndrome called Klippel Trenaunay syndrome or KTS. None of this includes research that we probably don’t even know about by other members of our VA program.

Are there any resources for networking that you’d like to share for coping with the physical and emotional concerns of a vascular anomaly?

This is a big issue, and one of our long-term goals for fundraising is to get a dedicated psychologist for our patients. There are many patient-directed support groups, and we do have a fairly comprehensive listing of websites on our own website https://www.med.unc.edu/vascularanomaliesclinic/

What key pieces about this issue have I not mentioned that you would like to touch on?

First–thank you for your interest in what we think is an under-recognized program. Our website will also give you some idea of the other many divisions involved. We are always looking for ways to assist our patients in medication costs, transportation, gas, parking, etc., and to do this; we have been working on a fundraiser! Wrestle-A-Vessel (pun intended) is underway, and you can read about it on our website or can donate at unchf.org/wrestleavessel.

Thank you, Drs. Blatt and Brondon for sharing this enlightening information about vascular anomalies and the critical work your group is doing.