My laboratory is interested in the chemical basis and biochemical functions of cancer related pathways. We study problems regarding enzyme function, ribonucleoprotein complex assemblage, and biotechnology. We take an interdisciplinary approach that involves synthetic and physical organic chemistry, molecular biology, and enzyme kinetics to reveal the chemical basis of biologically important transformations and interactions. Our current focus is on telomere maintenance with specific attention to the mechanism of telomerase, a unique ribonucleoprotein reverse transcriptase. Telomerase is active in -90% of all cancer cells yet is not required for normal cellular metabolism and function. Telomerase thus has the potential of being a universal anticancer drug target and marker of tumor progression.

Telomerase functions as a reverse transcriptase by synthesizing telomeric DNA from part of its integral RNA subunit. Our research with ciliate telomerase has revealed a model for the mechanism for the accurate and processive synthesis of telomeric DNA that involves the product facilitated translocation of the nascent DNA (1). We also found that telomerase activity varies in an unexpected template dependent fashion. This template dependence is not evident with the natural substrates due to the rapid rate of single telomeric repeat synthesis. We revealed this dependence by utilizing a substrate analog that was used by telomerase with reduced activity.

Recently, we have employed a specialized nucleoside analog, 2′-O, 4′-C-methylene deoxyguanosine, to study the interaction between a telomeric primer and the telomerase template. These experiments have provided evidence that the RNA-DNA duplex formed in the active site is an A-form helix. Further, the data provide further proof that unwinding the RNA-DNA duplex is rate limiting for processivity (2). Currently, we are examining several other aspects of telomerase enzymology including regulation by its substrate dGTP, specific template-position-dependent reactivity, the stereochemistry of nucleoside monophosphate transfer, and the presteady-state kinetics.

We are also defining the chemical basis for telomerase assemblage in vitro from recombinant TERT and TR, the catalytic and RNA subunits of telomerase, respectively. We are defining, at the chemical level, the roles of individual functional groups of the telomerase RNA in assemblage and catalysis. The information gleaned from these experiments will allow us to rationally design small molecules that prevent telomerase assemblage and activity. A long-term goal of these projects is to design small molecules that perturb fidelity of the telomerase reaction. If we can control the fidelity of telomerase, we will be able to change the sequence of cancer cell telomeres, which would cause cell cycle arrest and apoptosis. This modality of telomerase-directed anti-cancer therapy would not rely on telomere erosion, which other telomerase inhibition approaches require. 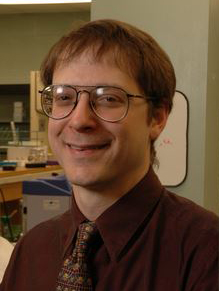