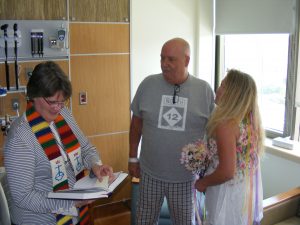 When David and Jackie Hannah got married for the second time, it was in a hospital room, he was still wearing his pajamas, and he was completely surprised.

“We’ve got something going on for you,” Patricia Cadle, oncology chaplain at the N.C. Cancer Hospital, told David as Jackie walked into the room behind nurses and other hospital staff, wearing white, flowers in her hair, and carrying a bouquet. “This beautiful lady wants to marry you – again.”

It was the day after David had received a stem cell transplant as part of his treatment for lymphoma, which is a type of blood cancer. With new stem cells and a new chance at life, Jackie arranged for them to have a new marriage, too.

“I told him that he had his new stem cells, he had a new life, and now he has a new wife, and he has a new marriage,” Jackie said. “And I told him from this day forward, it was going to begin again.”

The couple had been married just six months when David began experiencing health issues in 2014. He initially went to his doctor to see what was causing him to feel dizzy. When his condition worsened, Jackie encouraged him to go to the hospital in Asheville. It was there David learned his kidneys were failing, and he had an advanced form of large B-cell non-Hodgkin lymphoma. 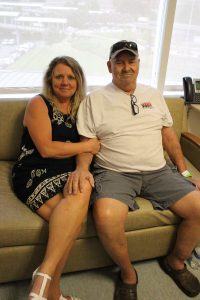 “During that time, he was worried that I would leave him,” Jackie said. “Just being married six months, he was afraid that I would tuck my tail between my legs and run like a dog. I don’t do that. I stand up and fight. And I fight until I can’t fight anymore. With this, we had fought for three years.”

David had six rounds of chemotherapy that put him in remission for almost two years. Then in July of last year, a scan revealed the cancer had returned in his spleen. He had surgery to have it removed, and thought he was on the road to recovery. But the next week, the doctor in Asheville called to confirm it was cancer, and told him he needed a bone marrow transplant.

“All I could think about was my Jackie,” David wrote. “She doesn’t deserve this. But she looked at me, and took me in her arms and said, ‘just hold on to me, and I will carry you through this baby.’”

In March, they traveled to Chapel Hill for the procedure. They found the staff at the N.C. Cancer Hospital to be supportive and helpful through the process. Jackie started planning for the ceremony after David was hospitalized.

“The one thing he always asks me is: ‘Do you really love me? Why are you with me?’ Or something like this,” Jackie said. “And I just usually blow him off. But I wanted to prove that I really do love him.”

The morning on the next day after the transplant, Jackie returned to the SECU House where she was staying to get ready for the ceremony. The first time they were married, it was in front of a magistrate. This time, Jackie wanted it in front of God. As someone played a wedding march from their phone, she walked in behind staff, and Jackie and David renewed their vows.

“I was so shocked,” David said. “Here I was in pajamas, getting married.”

It was the first wedding that Kelly Kivette, senior recreation therapist, had seen on the Bone Marrow Transplant at UNC Hospitals.

Often, she said the staff on the unit refers to transplant day as a new birthday for patients. She said it was uplifting for staff to be a part of the occasion.

“We know the hospital is not a ‘normal,’ place, and patients and their families are going through difficult situations,” she said. “It was so nice to be a part of something so joyous that meant so much to one of our patients.”

William A. Wood, MD, UNC Lineberger member, associate professor in the UNC School of Medicine, said the stem cell transplant process can be challenging for any patient from a physical, emotional, social and spiritual perspective.

“Some patients take the opportunity to renew vows or engage in other ways of reflection and prioritization that contributes to growth and resilience over time,” he said.

David experienced some complications from his treatment, but has recovered from them. On Tuesday, May 2, the newly re-married couple were set to go home.

Reflecting on their life together, David and Jackie believe they were meant to be a couple. David was working as a truck driver, and Jackie was in school and working at a manufacturing plant in western North Carolina when they met through a dating website four years ago. From the first date, “it just clicked,” Jackie said.

David was kind and compassionate, and didn’t take her for granted, Jackie explained. David knew Jackie was someone special he came home late from work one night and saw that she had fallen asleep on a deck chair waiting for him, but not before she had cooked his dinner on the grill. He considers himself a good cook – but she was better.

“God put Jackie into my life for a reason,” David said.

“And vice versa,” she said.

To help them with the cost of associated medical and living expenses, the couple is accepting donations through the fundraising website GoFundMe. For more information, go to the link https://www.gofundme.com/David-Hannah.