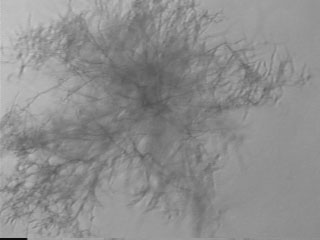 Description: Fungi or molds produce thin filamentous mycelia and sometimes denser clumps of spores. They are easy to observe under a low power microscope and can even be seen without magnification in advanced stages of contamination. They can appear whiteish, yellowish, or black in culture and when in advanced mycelial growth stages look like large fuzzy patches in the dish or flask.

Characteristics in mammalian cell cultures: In early stages of contamination, fungi do not typically cause pH changes in the medium nor do they have significant toxic effects on mammalian cells. Fungi mostly grow in the medium unattached to the cells or growth vessel, but can become attached to either. The spores that give rise to the mycelia formation are often hard to detect in cultures. Cell cultures can often be cured of fungus contamination when detected early by treatment with certain antibiotics (actually antimycotics). See below.

Typical routes of infection in cultures: Fungus and mold spores are ubiquitous in the environment and generally infect cultures via an airborne route. Heating and air-conditioning systems are notorious for having high concentrations of spores. Therefore, the seasonal changes of fall and spring usually result in an increase in this type of contamination in cultures as heating or A/C systems are switched on or off. Also, particularly in the spring, the higher bioburden in the air from pollen particles can carry fungal spores into air handling systems and into labs on the clothes of lab personnel.

Antibiotics: The two most common antimycotic agents used in cell culture that are effective against fungi or molds are Amphotericin B (Fungizone) and mycostatin (Nystatin). Important note: routinely used antibiotics such as penicillin/streptomycin (pen/strep), gentamicin, and kanamycin are NOT effective against fungi or molds. Fungizone can be used in media at final working concentrations between 0.25ug/ml and 2.5ug/ml. Fungizone is typically very toxic in cell culture systems and should be used conservatively. Nystatin can be used at final working concentrations between 100U/ml and 250U/ml. Nystatin is a colloidal suspension rather than a solution and should be mixed thoroughly before it is added to cell culture media. When nystatin is in medium and viewed under a microscope, it will appear as small crystal-like particles. A very useful list of antibiotics, the organisms they are effective against, and recommended working concentrations compiled by the Sigma-Aldrich Company can be found as a pdf document (129Kb, 3 pages) by clicking on the following link. The file will be downloaded and can be opened with Adobe Acrobat Reader.Antibiotic List